We chose the Middle Ages in Western Europe as our time period. We represented this on our trebuchet by basing the over all mechanical design on an actual trebuchet from that period. Also we designed it to look like yellowed wood, as the real trebuchet were made of wood. My strongest skill in this project was creativity because our design is the only one like it in the whole class. And it shows our time period using important parts like the wood coloration. My greatest area of improvement is in communication because I sometimes couldn't explain to my partner what needed to happen to work on our trebuchet. For example, I couldn't explain how to build the rubber band stopper for the arm. So I ended up just building it my self. 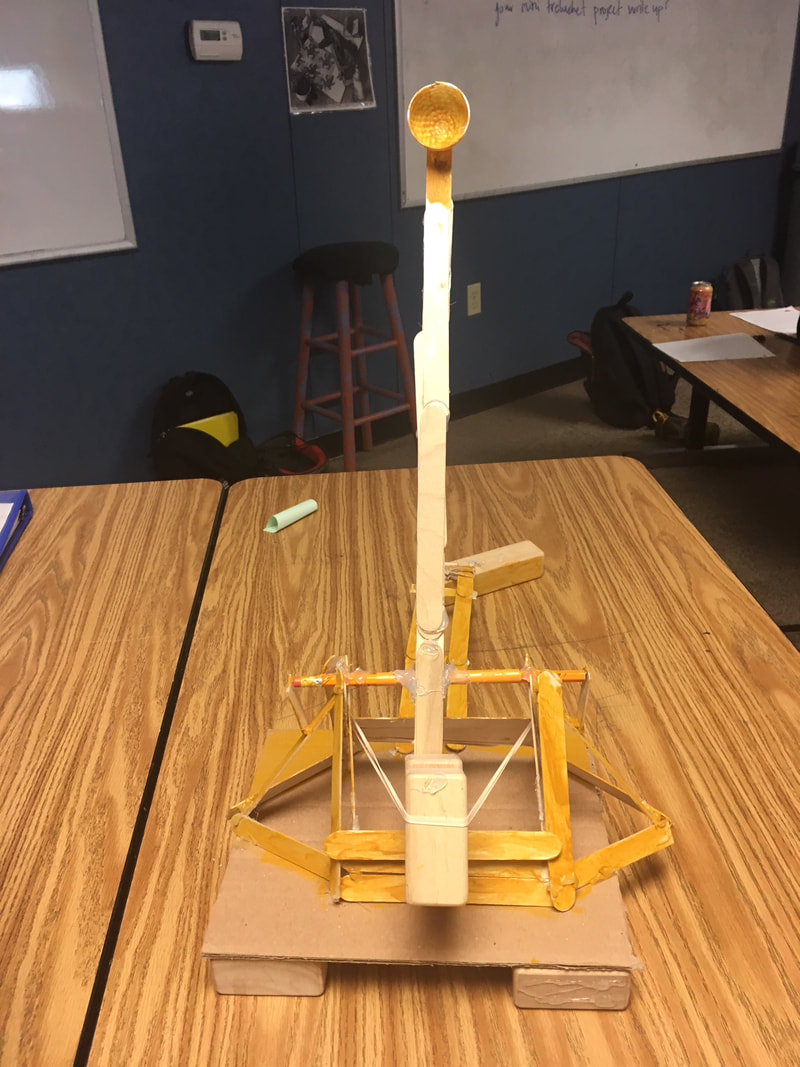 Our Rube Goldberg machine demonstrated pulley, a lever, and an inclined plane. The pulley was the 6th step in the rube. It was a bucket attached to a blockage. When triggered, it removed the blockage and let balls roll down. The lever was 4th step and was triggered by dominoes. The inclined plane started the whole rube by rolling a ball into the next step. The rube used potential energy, kinetic energy, and momentum. For example, In my step, there was potential energy because I had a ball on top of a slope. It stayed there until triggered. Our whole rube had kinetic energy because it was all moving and changing. And for momentum, my step and the next step required momentum. This is so because my step had to push a ball at another one.

To have a better understanding of potential energy, I used a problem in which a 70 gram ball and 50 cm drop into a bucket. To find the potential energy, I calculated the 70 gram ball into kilograms. Then I changed the 50 cm into meters. Finally I multiplied 0.707 kg and 0.5 meters with gravity (9.8). I got 0.0343 joules as the potential energy. Using the same problem, I calculated the the kinetic energy. First I kept my previously known information, then I found the velocity. Finally, I multiplied all the information and found the kinetic energy is 0.00070875 joules.

The process to create my rube step was a simple and not complicated. From the first 3 step rube, my steps have been the same. I didn't change it at all because it worked every time. It was a lever that when triggered would send a ball into the next step. I only added some side rails in the last couple days before exhibition. My greatest strength was creativity in the rube project. For example, I came up with an idea that addressed all problems that might have popped up. Also the design was tied into the overall design and satire. My weakness in the Rube Goldberg project was collaboration. Throughout the project, I rarely worked with others. I mainly worked and helped my friends, rather than my teammates.
Powered by