“Eating is an Agricultural Act?” The Ethics of Food and Eating 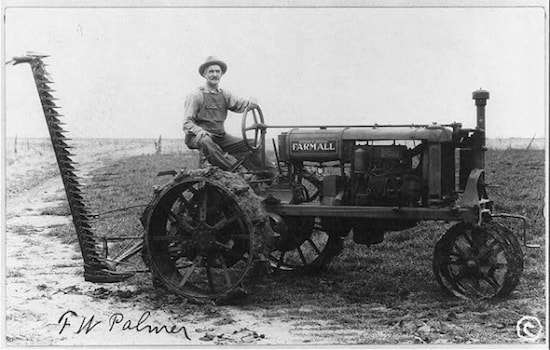 Artist Statement:
​This painting represents my personal philosophy in several ways. The matte, subdued, one color squares represent to me regularity and predictability. Doors have always had a connection to spirituality in my eyes. My door represents the unknown beyond, but it remains closed until we die, or attempt to explore the spiritual. If my philosophy was 3 dimensional and a real object, it would look like this painting.

Reflection:
The project I did for exhibition was a historical collage showing extremism in any form is vile and dangerous. I demonstrated this by showing the two opposing ideologies in the 20th century, fascism & the Nazis, and communism & the USSR. I, despite having a cold and being sick, had an enjoyable time at exhibition explaining my project to the community. People were understanding and curious, which encouraged me to talk. In general, it seemed the exhibition was well put together, and the community enjoyed it. People agreed that my project was refreshing as it was simple and “black & white” compared to the “grey” of other projects. My political ideology has not changed throughout the project, including my personal connection essay. In my project, it showed a simple problem, that extremism is bad, therefore, there is not much room for a change in opinion. But, through research, particularly in my personal connection essay, learned more facts about socialism and capitalism. A very important aspect of this process was my empathy interview with Kat’s husband, Charlie Jackson, where I learned the only socialist idea he sees in America is universal healthcare. I generally thought they were many other ideas being proposed that would fall into the category. I suppose being from a country devoid of socalist policies through the majority of the country leads me to see many ideas as socialist.  I have learned the other side values the community as a whole, while capitalists care about individualism in general. This falls into the values of each side of the political spectrum that we talked about in the beginning of the year. More liberal leaning folks tend to care about the whole while conservative minded people think in a “my people” mindset. Since my project was about different forms of government, I learned though democracy is flawed, it is the best and most effective form of government we have. No other form of government allows the citizens to have a say in the way they are ruled. Of course there are flaws, but I account that more to the fact that human nature is flawed. Fascism and communism both are responses to that fact. For instance, in a perfect world, communism would be an effective form of government, but since it goes directly against human nature, it has failed spectacularly everywhere it has been tried, and has devolved into authoritarian governments. Totalitarianism and authoritarianism exist because power corrupts and many feel the need through authority fix the chaos in the world. Again my political views have not changed dramatically as I still think socialist and especially communist ideas look good on paper, but tend to dissolve into authoritarian dictatorships. Capitalism isn’t perfect by any means either, leading me to believe any political ideology will be flawed for the simple reason that humans are flawed creatures. As stated before, democracy is the best political system we have yet to have in the world. It will certainly be interesting to see what political beliefs will take place in the future. Though as many have pointed out, history tends to repeat itself, meaning most ideologies are just rebranded previous ones. You can see this in America in the current day with resurgence of both communist and fascist ideologies. Despite both being despicable and foul, the ideas continue to ensnare many a-mind. Neo-nazi beliefs are on the rise, as they have grown by 600% on Twitter according to the George Washington University. As are communist ideas with many communist parties such as the Communist Party USA and Communist Labor Party having their memberships spike. This leads directly to the message of my project, that any political belief on either side of the spectrum, if you go far enough will result in tyranny. An interesting and important piece of media is the 1947 Don’t Be Sucker film produced by our military. The film outlines the ways dangerous and vile ideologies take hold in places throughout the world, specifically Nazism. As soon as people give these ideas a thought, the have a chance to spread. In summary, it is of utmost importance for the sake of democracy and freedom everywhere, to leave these foul ideas where they belong, in the garbage bin of history.
My project:
The art piece I have created has an important and in my eyes needed idea, that extremism in all forms is a scourge. As my written piece is about the line where socialism becomes detrimental, the same is true for capitalism. Though these are not true opposite political systems, (that would be communism), it demonstrates that any form of political ideology can quickly become sour. Nazism and Communism were some of the most polar opposite beliefs, but they both caused terrible suffering and death. According to NyBooks, Nazism killed approximently 11 million non combatants, while the USSR and its satellite states killed around 8,891,807 to 18,957,680 million, (Though these deaths were mostly caused by famine and starvation, the others were caused by national and ethnic reason similarly to Nazi Germany). In our modern day political discussion, whether it is socialillism taken too far or Capitalism, it is important to understand this belief for the sake of democracy and freedom everywhere.

​My Project Visual:
​
Personal Connection Essay:
Socialism In America?
Is there a point where socialism in the United States would become detrimental to us all? I have come to believe there is from my life experiences and family. I have grown up in a well off family, but both my mom and dad were quite poor when growing up. My dad’s dad, my grandfather left when my dad was six. They still have a great relationship, but the point is my dad and my grandmother had very little money. They could not afford a car. On my mother’s side, her mom had her when she was 18. Being an 18 year old, she had very little money to support a child. Even from the youngest age, my mom was working. In high school, my mom was working 3 jobs. But both my parents worked there hardest and eventually going to college. My dad went to Dartmouth College by trying his hardest in school and with help from his dad. Both my parents, but most definitely more my dad, do not want to give away their hard earned money. They believe they have worked very hard for what they have, and don’t wish to see it squandered on “stupid” goverment programs. My grandfather is even further anti-tax as he is the proto-typical capitalist. He has been investing every day in the stock-market since the 1950s. He wants very little restrictions in business as that decreases profits.

But, with every positive, there is a negative, unrestricted business almost always creates winners & losers. The typical business plan has the head of the company making exuberant profits, while the lackeys doing hard work barley turn a dime. For example, imagine a coal company, in which the CEO makes millions, but the miners doing the work, make minimum wage, while getting black lung, and failing to therefore pay for their medical needs. Socialism, at its core, as Jessica stated, is economic equality. But in my personal eyes, equality is an incorrect way of doing things, a far better method would be through equity. Equality is, as the name suggests, equal, while equity, gives each person they need to succeed. By this logic, I typically dislike the concept of equality. An example of equity in society could possibly be income taxes, and therefore tax brackets. If you do not understand what tax brackets are, they are “buckets” in which certain incomes over a certain amount are taxed more than others. To refer to my original question, is there a point where socialism might cross the line, I come back to my idea of CEOs and the amount of profits they are entitled to. In my opinion, CEOs should certainly make a larger amount as encouragement for hard work, but not a ridiculous amount. On average, back in my day, 1950, a CEO made 20 times more than their workers, which I believe to be a fair amount of profit. But today, a CEO makes on average 361 times more. 361 times more is a ridiculous some of money in my eyes.
In my beliefs over this issue are rooted many American ideals and values. According to Hazleton Area School District, the main American ideals are freedom, individualism, idealizing what is practical, volunteerism, mobility, patriotism, and the American dream. Out of these, there are quite a few which relate to my opinion of socialism. These being individualism, idealizing what is practical, and the American dream. I do not believe in government handouts. In my opinion they discourage work. For the people who truly need help, there has to be a better way. People who do not want to work, should not be taking my hard earned money, These opinions of mine are intertwined with individualism and the American Dream. In the words of the Hazelton School District, “Individualism, understood not only as self-reliance but also as economic self-sufficiency, has been a central theme in American history (frontiers heroes who braved the wilderness alone, farmers whose success depended on their ability to confront the hardships of land and resourcefulness, the celebration of the small businessman who became a financial success on his own.” But, people are held back by racial and gender barriers. Removing these would allow most to truly live in the American dream and create the world you need. For example, my dad’s primary client, Chenmed, is owned and operated by the Chen Family. The Chen family hires many people from all creeds, races, and sexes. Specifically a worker of the company my dad recently coached. He was from pakistan and came with little money to the USA. He, in the ideals of the American dream built a life from nothing, he saved money, got good grades, and made it to medical school. Here he got his doctorate and is now making thousands of dollars. Self-sufficiency encourages growth and allows people to try their hardest. You have no one else to blame if you make negative decisions in life, and you are affected by it, (If racial and gender barriers are removed from the equation.)When you have only yourself and no government handouts,(handouts I might add that are being funded by individuals who understand self-sufficiency),to save you, you are more likely to try to succeed and prosper. As stated by Investopedia, “One disadvantage is that people have less to strive for and feel less connected to the fruits of their efforts. With their basic needs already provided for, they have fewer incentives to innovate and increase efficiency.” Being fed handouts does nothing. If you only give your dogs scraps from the table, it will never learn to hunt, and only in the case you disappear might the dog try to be self-sufficient.  This goes directly against Socialism’s idea of a “social safety net.”
In conclusion, though they are certain benefits of socialism, I believe, as with the government, it should be implemented only when absolutely necessary. Though Capitalism is generally considered unfeeling and “cold”, I believe it to be the better of the two. But this is not the question I originally asked, I asked what is the point where socialism would be detrimental to society. I believe, though I have no specific examples, socialism should be used in the barest amount, for specific purposes, and let Capitalism due the rest.