Interphase: Interphase is the first phase in mitosis. In Interphase, both the DNA and the other components in the cell duplicate, preparing to separate into two identical cells. The proteins move through the microtubules.
Prophase: In Prophase, the chromosomes begin to reveal themselves as the chromatin condense, a preparation for Prometaphase.
Metaphase: In Metaphase, the chromosomes line up along the cell's center. The exterior shell of the cells has began to break apart.
Anaphase: In Anaphase, the sister chromosomes break apart and move to the opposite poles.
Telophase: In Telophase, the exterior of the cell, also know as the nuclear membrane reforms. The nucleus also begins to reform around the split chromosomes.
Cytokinesis: In the final phase, Cytokinesis, the cell splits into two identical cells.
This project was completed in conjunction with Amira, Clarice, Mason, Zoe, and Alyssa.
I Originally worked by my self, but after my presentation was deleted in an accident, I worked with Nick and Anthony. Our photos were having trouble becoming a presentation, which was finally completed show below. After my breakdown, Amira, Clarice, Mason, Zoe, and Alyssa offered to help me. So I placed our presentation above. I created another presentation alone, it is down below.
1. What is mitosis, and when does it occur?
Mitosis is a certain way cells divided to create more cells. In mitosis, the components of the cell, including chromosomes, microtubules, and the nucleus move and duplicate, before finally splitting into two identical cells.
2. What are the stages?
There are several phases in mitosis. They are Interphase, prophase, prometaphase, metaphase, anaphase, telophase, cytokinesis,
3. How long do they last?
​Interphase lasts %55, prophase lasts %.27, prometaphase last %8,
4. How does this relate to the current we are doing with planarians?
This relates to our research regarding planarians because mitosis is happening around and in the cuts on our planarians.
5. How does understanding the process of mitosis help us tackle questions about human regeneration?
Mitosis helps us see how we might micro engineer our cells to regenerate our entire body. With electron microscopes, we can see how this process occurs in creatures that regenerate completely.

Abstract/Overview;
In this project, we each tested our own experiments over a several week period, and then exhibited our work to the public. Personally, I worked to see whether trimming with fire is more effective for the plant's well being than scissors. I changed my original experiment to be more interesting and interactive when I was testing.
Why This Matters;
My research matters because we live in a forest fire prone area, especially when we have some crippling droughts accompanying them. This research might be able to find certain species of plant that thrive when a fire burns through. If the testing shows along with common sense, that burning plants hurts them, it can be used as a highly effective killer for invasive species for instance.
What Would I Have Done Differently?
If we redid the experiment I would add a third test group that is not trimmed or harmed in any way. This would not only prove which type of trimming is most effective, but also if it is beneficial at all. I would have also used a species like crab grass which as fire resistant tendencies.
Math Question;
​The math question I chose was the one revolving around the chi squared answer I found through my testing.Formula: ∑ (Observed-Expected)
Expected

We did this experiment to see first hand the results of injecting carbon dioxide into a plant and giving it light. I learned from this experiment the real life effects of Co2 on plants and their correlation with oxygen. As you can see below, the cycle of photosynthesis goes as follows: Carbon dioxide is absorbed by the plant, certain light ways cause the carbon atoms to fuse into glucose. Luckily the entire system is a closed system, meaning it is completely self sufficient except for the sunlight. The glucose feeds the plants and the bi-product is oxygen, which it realizes into the atmosphere. 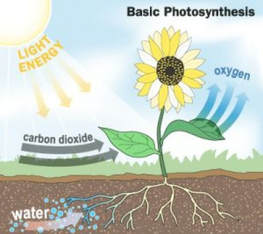 As you can see if my graph below, the number of leaf disks floating varied between zero and 4, but never reaching 10. The type of leaf I used in this experiment was an Oak and the type of light I used was the purple growing light. I personally believe the disks dropped from 4-2 because my light was knocked over by an unknown assailant, which I fix once I saw it. It dropped again because my light became unplugged. But once plugged it back in my leafs became rising again. 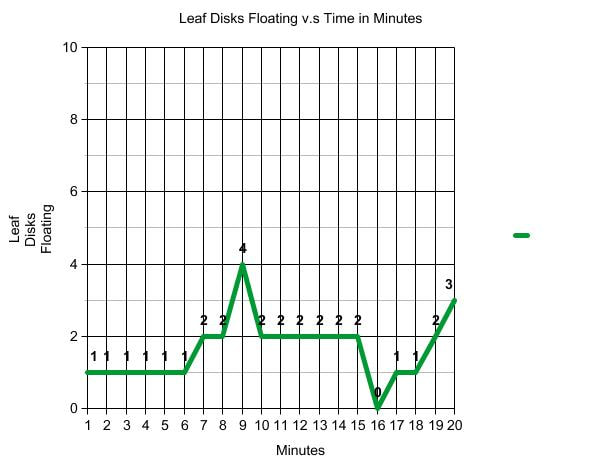 Purpose of Experiment:
Explanation of monocots and dicots: Monocots have 1 cotyledon while Dicot have 2 Cotyledons. Monocots have variables of 3 petals while Dicots have variables of 4-5 petals. Monocots have wet roots while dicots have tap roots.
My Predictions: After dissecting both the corn and mung beans, I personally believe, the corn is a monocot as it has 1 cotyledon while mung beans are dicots as they have 2 cotyledon. Once the corn begins flowering, the petals are in variables of 3, another chief sign of a monocot. And finally, once the corn sprouts, it has a singular leaf rather than 2 leaves.
Observations: These are the results I found while the experiment was running.
Day 1, I germinated the corn and mung bean seeds with clean water, paper towels, a clear solo cup, sugar, and the crushed leaves of it's brethren.
Day 2, No plants have sprouted yet. I believe the mung bean shall sprout first.
Day 3, The mung beans have released their cotyledons. I was corrected in my hypothesis of the mung beans sprouting first. I gave the plants 1/2 cup of water.
Day 4: Twas a sad day for experimenting upon the plants for an unknown colleague overwatered the plants, killing them all. All of their decomposing bodies were found floating upon the water.
Day 5, All plants has decayed into a odorous mush.
Day 6, The experiment has resulted in a cacophony of death and suffering for; the scientists and plants. Sadly, the plants were unable to recover from such an attack. Summer forced our research team to remove the experiment from the walls of the classroom.
Day 7, With confidence we have decided to restart our experiment and promise to avoid the tragedies of the past.
Day 8, We have given our new plants a acceptable amount of water.
Findings: Once we finished performing analysis upon the seeds, we have come to believe, the corn seeds are monocots and the mung beans are dicots.
Conundrums: Sadly, as stated above, all of our precious plants perished in the great flood of 2018. We had high hopes for our beloved plants, but alas they have expired into death.
Powered by